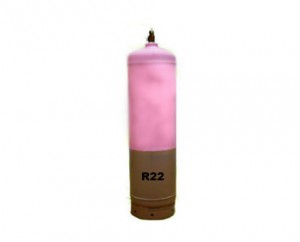 R22 is a HCFC refrigerant (Chlorodifluoromethane) with low ozone depletion potential. It has long been used in a variety of air conditioning and refrigeration applications in a variety of markets, including appliance, construction, food processing, and supermarkets. It is non flammable and non toxic.

HCFC refrigerants which came in to replace the CFC’s have the chlorine atom; but it is mixed with hydrogen and that makes the compound less stable in the atmosphere and less damaging. The most common HCFC is R-22. The phase out of the HCFC refrigerants has already begun and they will no longer be produced after 2020.